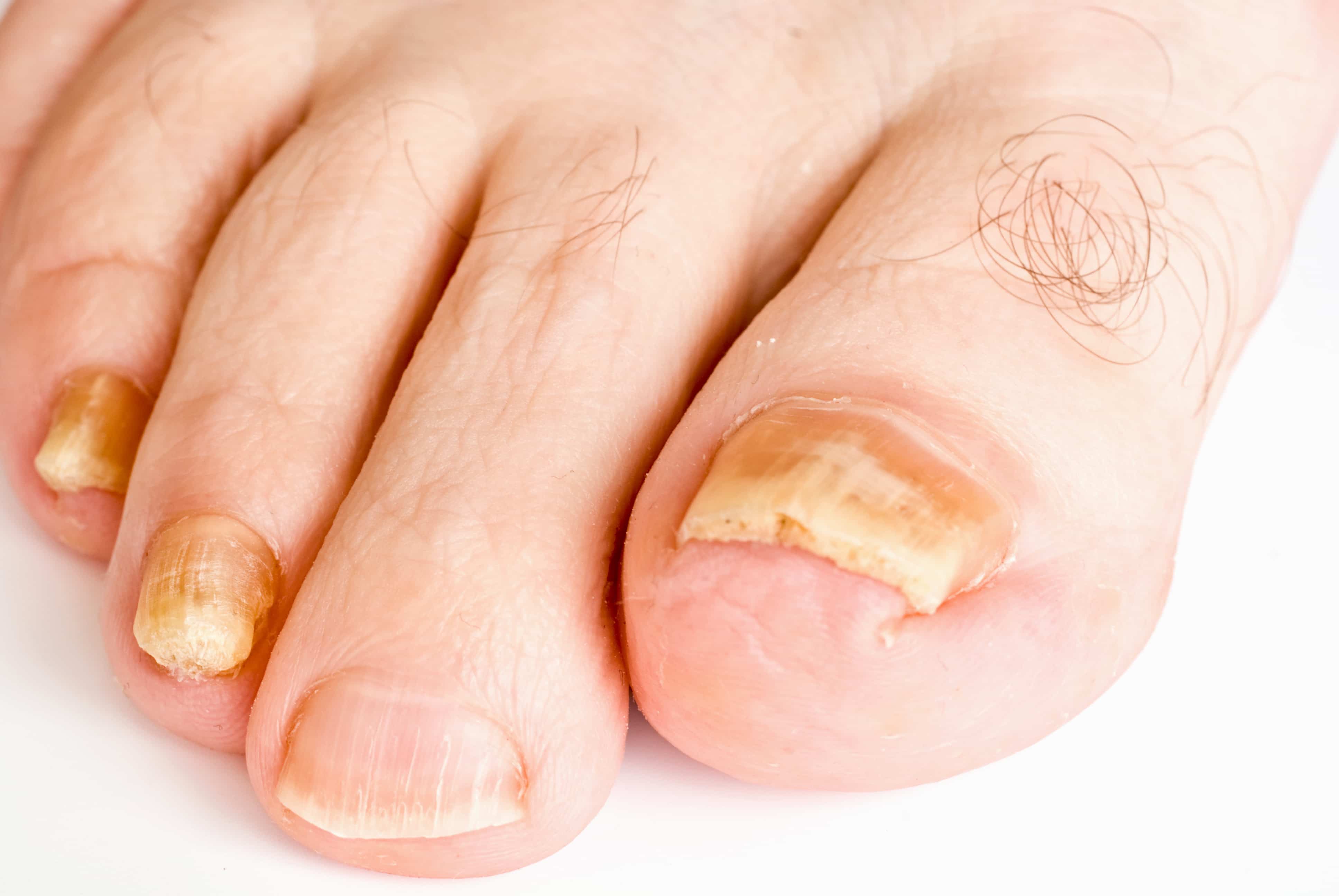 A common and frustrating condition, toenail fungus can make your nails discolored, thick, and brittle. It can also cause your toenails to separate from the nail bed, leading to further discomfort and other problems.

Like the fungus that causes Athlete’s foot, toenail fungus is a living and growing organism. This means that it can take a while between when your feet come into contact with the fungus and when you see or feel symptoms on and under your toenails. But when those symptoms do make themselves known and you look down to see unattractive, fungus-damaged toenails, you’re going to want to do something about it.

At JAWS podiatry, we can help you get the fungal-free nails that can get your feet back in sandals through a revolutionary, safe, and powerfully effective treatment for toenail fungus called PathFormer.

You can find plenty of prescription and over-the-counter anti-fungal medications that you can use to treat toenail fungus. The problem is that you are trying to address a condition that exists underneath the nail. Nail fungus lives not only in the many layers of your toenails but also in the nail bed itself. With the nail standing in the way, topical creams and ointments can have a hard time reaching the source of the infection.

PathFormer removes that literal barrier to treatment by applying the medication directly to the fungus underneath the nail.

If your Achilles tendon ruptures, you might hear a pop, followed by an immediate sharp pain in the back of your ankle and lower leg that is likely to affect your ability to walk properly. Surgery is often performed to repair the rupture.

This pleasant patient was referred to our office by another fellow colleague with a chief complaint of an almost complete full tear of the Achilles tendon. The patient sustained the injury in January of this year. After the injury, she presented to an urgent care center at which time the clinical presentation was Assessed and addressed.

For Foot Care and Health, Call the Foot and Ankle Specialists at JAWSpodiatry Today to Schedule an Appointment

The skilled podiatrists at JAWSpodiatry in Hollywood, Florida have extensive experience working with individuals to keep their feet healthy and address any problems should they arise. Our exceptional foot and ankle specialists and friendly staff welcome the opportunity to provide you with the highest degree of care in our welcoming, comfortable offices. Please contact us today at (954) 922-7333 to schedule a consultation.

Tips for Runners to Prevent Foot and Ankle Injuries 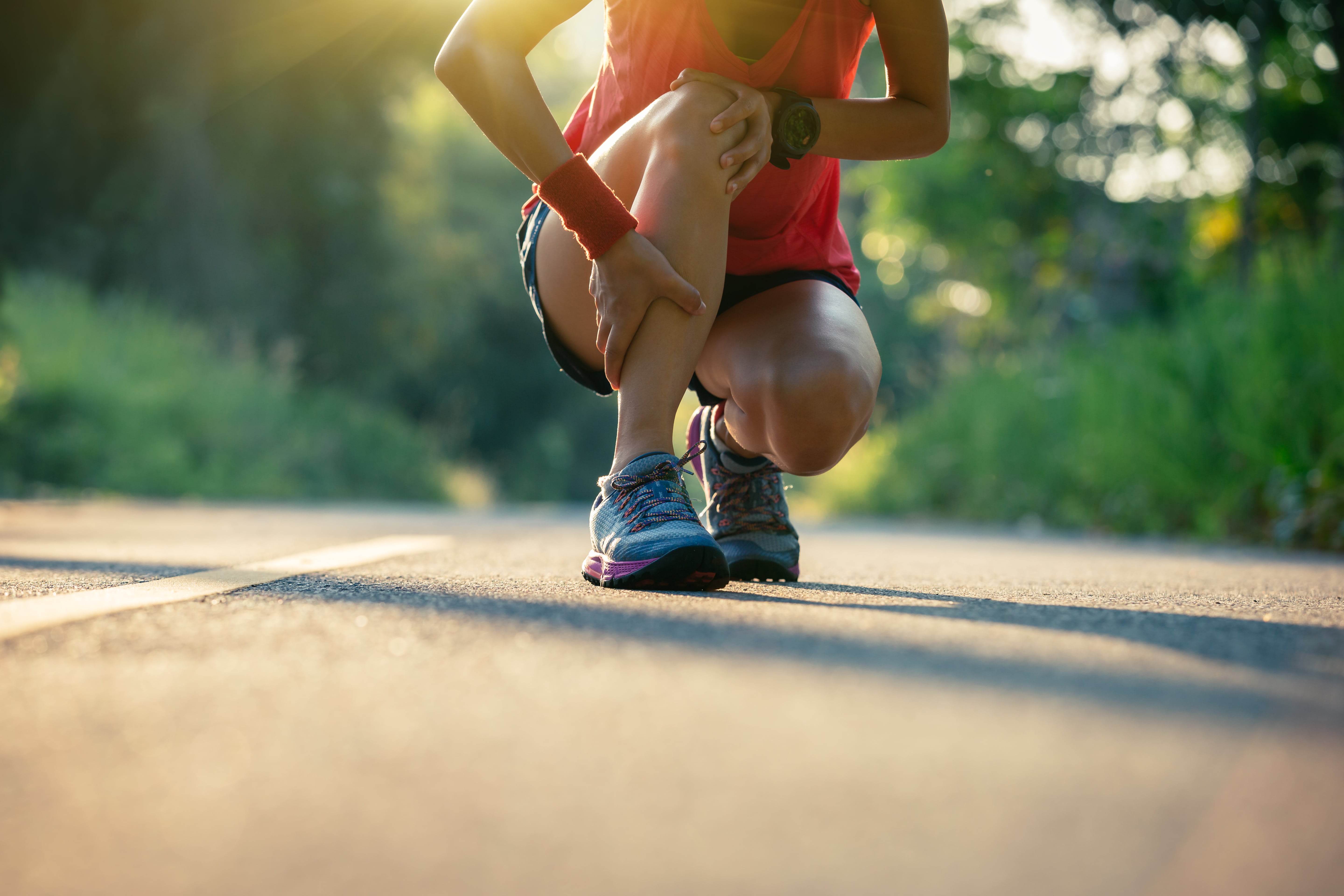 When someone is sidelined with an illness or injury or they are recovering from one, you can tell what kind of person they are by the questions they ask. If the first question is “When can I start running again?” that person sees running and jogging as essential as to their happiness and well-being as being able to walk.

No one wants to get a foot or ankle injury. But for avid runners, such injuries are not only painful; they can be incredibly disruptive and depressing. Runners can also be more prone to foot and ankle problems than other folks, especially conditions like ankle sprains, Achilles tendonitis, and plantar fasciitis. Such risks combined with the importance of running in their lives make it imperative that runners take whatever steps they can to prevent such issues in the first place.

Here are some simple tips for runners that can help minimize the chances of a foot or ankle injury and keep them moving along:

END_OF_DOCUMENT_TOKEN_TO_BE_REPLACED

This pleasant patient presented to our office today with a chief complaint of an ingrown toenail which had been present for one year in duration. The patient finally made the wonderful decision to come to see us here at Jaws podiatry so we can finally take care of his problem to alleviate the excruciating pain.

For Foot Care and Health, Call the Foot and Ankle Specialists at JAWSpodiatry Today to Schedule an Appointment

The skilled podiatrists at JAWSpodiatry in Hollywood, Florida have extensive experience working with individuals to keep their feet healthy and address any problems should they arise. Our exceptional foot and ankle specialists and friendly staff welcome the opportunity to provide you with the highest degree of care in our welcoming, comfortable offices. Please contact us today at (954) 922-7333 to schedule a consultation. 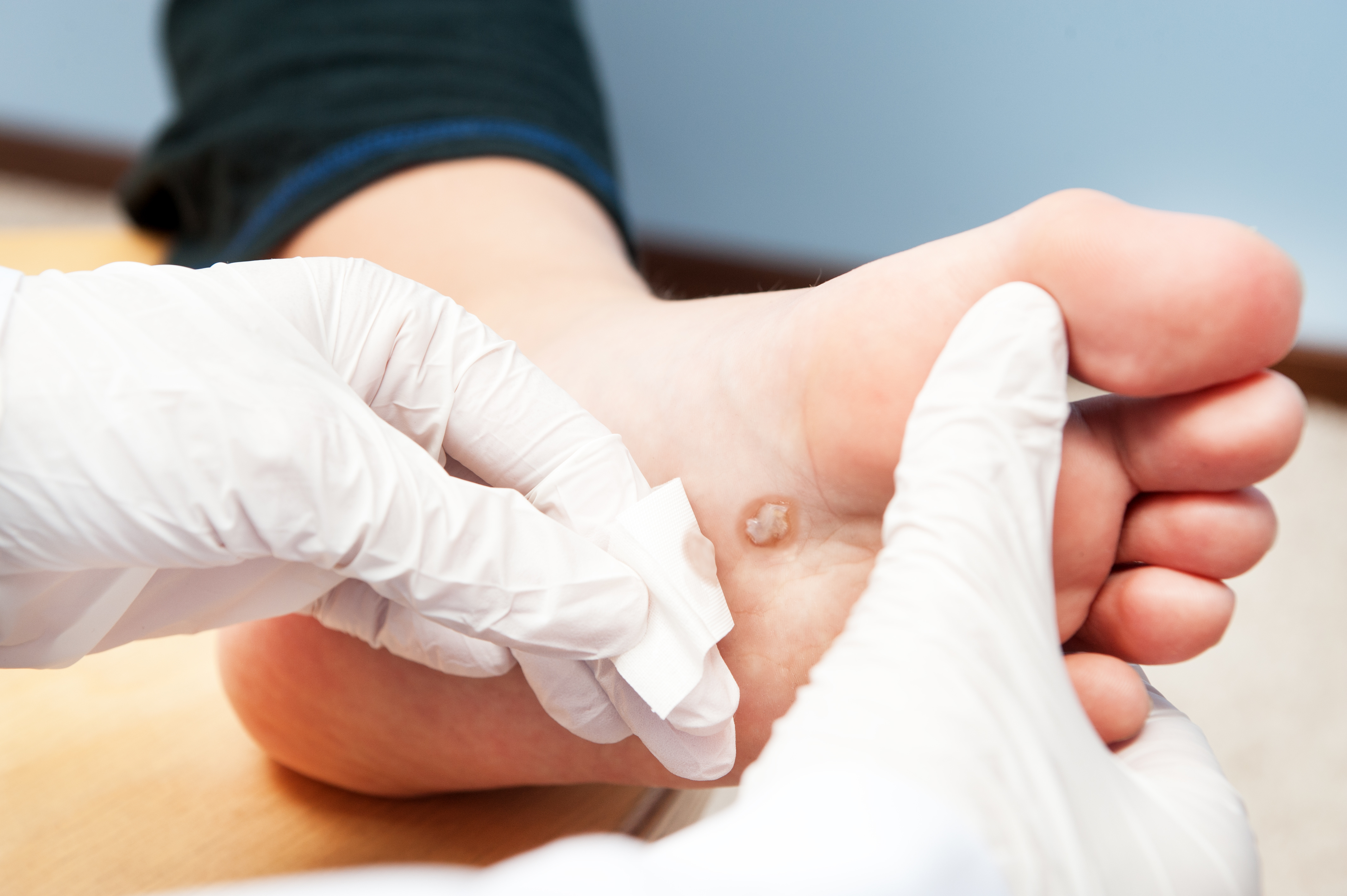 Health problems which would be painful and debilitating for most people can be downright catastrophic for individuals with diabetes. This is particularly true when it comes to issues affecting the legs and feet. Diabetes makes the extremities extremely vulnerable to infection and the development of foot ulcers. Making matters worse, diabetes can limit the ability to experience foot pain or discomfort which would otherwise alert the person to the existence of the problem. While diabetic foot ulcers are treatable, they can become much more severe and painful if not addressed in a timely fashion.

That is why prevention of diabetic foot ulcers is so critical. Individuals with diabetes need to stay vigilant and take affirmative steps to ensure that their feet are trouble-free. Fortunately, working closely with a podiatrist experienced in diabetic foot care, those steps are easy.

What Are Foot Ulcers?

Diabetic foot ulcers are open sores or wounds that usually develop on the bottom of the foot. Several factors can contribute to the development of foot ulcers, including poor circulation, deformities, irritation, pressure or friction, trauma, and long-term diabetic conditions. Redness, swelling, and drainage are frequent and visible symptoms of a foot ulcer. END_OF_DOCUMENT_TOKEN_TO_BE_REPLACED

There is perhaps no more insidious enemy to the skin and nails of our feet than fungus. Fungi may be small, but they are resilient, and they have an uncanny ability to invade our feet. Once fungus does so, it doesn’t stop there. It creates all kinds of uncomfortable, unattractive, and unhealthy problems if left untreated. And fungus isn’t content to stay put either, as it spreads quickly and easily from one person to another.

While fungal infections can develop in other parts of the body, our feet are particularly vulnerable because of their frequent contact with environments that fungus love; moist surfaces like the surfaces in locker rooms and around swimming pools, and the darkness and warmth they find on our socks and shoes. Making matters worse, feet tend to have weaker blood flow than elsewhere in the body, making it harder for the immune system to fight back against infection there.

But “foot fungus” isn’t just one thing. There are actually two primary types of fungus which can and do attach our feet:

Athlete’s foot may be the most widely known type of foot fungus because it is one of the most frequently contracted. This fungus got its name because it was (and remains) widespread among athletes who share locker rooms and showers. As noted, those wet environments, along with walking barefoot in them, make them fertile grounds for the fungus that causes Athlete’s foot to develop and spread. Athlete’s foot fungus belongs to a group of fungi called dermatophytes, which also cause jock itch and ringworm. These fungi love closed, warm, moist environments and feed on keratin, a protein found in hair, nails, and skin.

Skin inflammation and a white, scaly rash with a red base are common athlete’s foot symptoms, as are itching, burning, peeling, and a slight odor.

Fungal infections of the toenails are highly contagious and easily spread. They are caused by dermatophyte fungus, yeasts or molds. These fungi enter the skin through tiny cuts or small separations between the nail and nail bed. As with Athlete’s Foot fungus, these toenail fungi live in moist environments and thrive within dark and warm conditions.

Toenail fungus can cause your nails to become discolored, thick, brittle, and separated from the nail bed. If left untreated, it can lead to infections and other complications. Even when toenail fungus treatment appears to be successful and visible symptoms subside, repeat infections are a frequent occurrence.

The experienced podiatrists at JAWS podiatry in Hollywood, Florida know how frustrating foot and toenail fungus can be. We welcome the opportunity to help you solve these common problems. For a personal evaluation and to learn more about our foot and toenail fungus treatment options, please contact us online or call us at (954) 922-7333.

The experienced podiatrists at JAWSpodiatry in Hollywood, Florida are a growing group of exceptional professionals who offer the highest degree of foot and ankle care in a welcoming, comfortable environment. Please call us today at (954) 922-7333 or contact us online to schedule a consultation.
Mar
25

How to Get Rid of Toenail Fungus

Toenail fungus is a common, frustrating, and particularly pesky condition millions of Americans deal with on a daily basis. It can cause your nails to become discolored, thick, brittle, and separated from the nail bed. If left untreated, it can lead to infections and other complications. Even when toenail fungus treatment appears to be successful and visible symptoms subside, repeat infections are a frequent occurrence.

Treating nail fungus can significantly reduce the chances of recurrent infection. Severe toenail fungus may cause permanent damage to your nail, while infections can spread beyond your feet, particularly in individuals with diabetes or suppressed immune systems.

Some cases of toenail fungus can be resolved with at-home or over-the-counter anti-fungal remedies. But many fungi put up a tenacious fight or progress to a point where professional treatment is the only way to solve the problem.

We may recommend one of or a combination of the following approaches to your toenail fungus issues:

In some advanced cases of toenail fungus, the nail may need to be removed entirely so that a fresh, healthy nail can grow in its place. It usually takes about a year for the new nail to grow in fully, and we treat the nail bed with antifungal agents to disinfect the area.

The experienced podiatrists at JAWS podiatry in Hollywood, Florida know how frustrating toenail fungus can be. We welcome the opportunity to help you solve this common problem. For a personal evaluation and to learn more about our toenail fungus treatment options, please contact us online or call us at (954) 922-7333.

Ingrown toenails are one of the more common foot problems treated by podiatrists. They can be very painful, with people limiting their activity to keep off their sore feet. A small benign tumor called a granuloma can form along the nail margins. When the ingrown toenails get really big and nasty, the JAWS team is here to take care of them.

Preventing the many risks and complications that can accompany diabetes, arthritis, and chemotherapy requires vigilance, planning, and proactive measures. This is especially true when it comes to your feet and hands. “We’ve been horrified by the disasters we’re seeing from those manicure/pedicure salons,” says Dr. Jeff Shub, Chief Strategist of JAWS podiatry. “Good foot hygiene helps prevent many foot-related ailments, such as ingrown toenails and fungal infections.”

According to the Environmental Protection Agency, infectious organisms thrive in warm, moist, places, such as foot bath systems used in spas. At The Medicure Hand and Foot Spa, the goal is to provide traditional spa services that minimize the chances of patients developing nail fungus, bacteria, and infections. All Medicure instruments are sterilized with the same techniques used by hospitals that meet or exceed OSHA (Occupational Safety and Health Administration) standards.