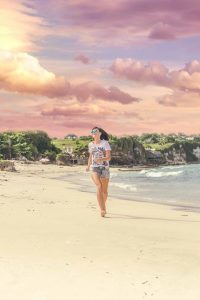 Running barefoot is an increasingly popular alternative to hitting the track or trail in high-tech running shoes, but it isn’t new. When our ancient ancestors were trying to get back to their caves and away from predators, they simply called it “running.” While our forebears may not have known it, barefoot running or doing so in “minimalist” shoes – which are more like gloves for the feet rather than shoes – may offer benefits besides not being eaten.

Some famous 20th Century Olympians and marathoners like Zola Budd were known for running barefoot, but the modern barefoot running phenomenon can be traced back to a 2010 study from Harvard University that was published in the magazine nature.

Noting that “for most of human evolutionary history, runners were either barefoot or wore minimal footwear such as sandals or moccasins with smaller heels and little cushioning relative to modern running shoes,” the researchers “wondered how runners coped with the impact caused by the foot colliding with the ground before the invention of the modern shoe.”

What they found suggested that barefoot running actually resulted in lower impacts on the feet and body thus reducing the chances of injury. That may seem counterintuitive in a world which tells us we need cushioning and shock-absorption in the form of expensive shoes. But the different way feet strike the ground barefoot can change the mechanics of how we run in a positive way.

Specifically, the study revealed that:

Barefoot running or running in minimalist shoes is not recommended for those who suffer from plantar fasciitis, tendonitis, flat feet, bunions or hammertoes. Even folks without such problems may not be suited for running barefoot. If you are considering trying it, do so carefully and gradually. You’ll need to toughen up the skin on the bottom of your feet and get used to the different stride involved. Runners wanting to join the barefoot running bandwagon are advised to consult with their physician or podiatrist first.

At JAWS podiatry in Hollywood, Florida, we know how painful and frustrating foot and ankle problems can be. We utilize the most advanced and non-invasive techniques to reduce foot and ankle pain and speed recovery. Please call us today at (954) 922-7333 or contact us online to schedule a consultation.

We use cookies on our website to give you the most relevant experience by remembering your preferences and repeat visits. By clicking “Accept All”, you consent to the use of ALL the cookies. However, you may visit "Cookie Settings" to provide a controlled consent.
Cookie SettingsAccept All
Manage consent

This website uses cookies to improve your experience while you navigate through the website. Out of these, the cookies that are categorized as necessary are stored on your browser as they are essential for the working of basic functionalities of the website. We also use third-party cookies that help us analyze and understand how you use this website. These cookies will be stored in your browser only with your consent. You also have the option to opt-out of these cookies. But opting out of some of these cookies may affect your browsing experience.
Necessary Always Enabled
Necessary cookies are absolutely essential for the website to function properly. These cookies ensure basic functionalities and security features of the website, anonymously.
Functional
Functional cookies help to perform certain functionalities like sharing the content of the website on social media platforms, collect feedbacks, and other third-party features.
Performance
Performance cookies are used to understand and analyze the key performance indexes of the website which helps in delivering a better user experience for the visitors.
Analytics
Analytical cookies are used to understand how visitors interact with the website. These cookies help provide information on metrics the number of visitors, bounce rate, traffic source, etc.
Advertisement
Advertisement cookies are used to provide visitors with relevant ads and marketing campaigns. These cookies track visitors across websites and collect information to provide customized ads.
Others
Other uncategorized cookies are those that are being analyzed and have not been classified into a category as yet.
SAVE & ACCEPT