The Aftermath of Hurricane Irma 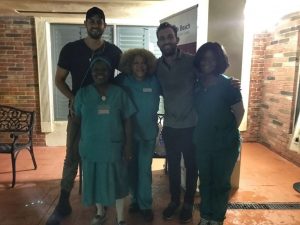 After the reported deaths in South Florida nursing homes all over the news yesterday the JAWS podiatry team jumped into action and visited a few of the nursing homes where we provide podiatric services and realized that the issue is that patients are suffering from the heat due to lack of electricity to power the A/C.

The only solution, while FPL fixes the power lines, is ICE.

In the short-term, our team tried to scavenge the few bags of ice left around town.

In doing so we realized that there was a desperate need for ice, and searched far and wide for hours until we were able to locate 600 bags of ice that a distributor was willing to sell, but could only drop off at one location.

Once located we engaged City of North Miami Beach, Florida and North Miami Police to help us distribute the bags, before they melted, to over 1,000 patients and to the nurses who’s families don’t have power in their homes.

It was a long night, but we got it done!!

We use cookies on our website to give you the most relevant experience by remembering your preferences and repeat visits. By clicking “Accept All”, you consent to the use of ALL the cookies. However, you may visit "Cookie Settings" to provide a controlled consent.
Cookie SettingsAccept All
Manage consent

This website uses cookies to improve your experience while you navigate through the website. Out of these, the cookies that are categorized as necessary are stored on your browser as they are essential for the working of basic functionalities of the website. We also use third-party cookies that help us analyze and understand how you use this website. These cookies will be stored in your browser only with your consent. You also have the option to opt-out of these cookies. But opting out of some of these cookies may affect your browsing experience.
Necessary Always Enabled
Necessary cookies are absolutely essential for the website to function properly. These cookies ensure basic functionalities and security features of the website, anonymously.
Functional
Functional cookies help to perform certain functionalities like sharing the content of the website on social media platforms, collect feedbacks, and other third-party features.
Performance
Performance cookies are used to understand and analyze the key performance indexes of the website which helps in delivering a better user experience for the visitors.
Analytics
Analytical cookies are used to understand how visitors interact with the website. These cookies help provide information on metrics the number of visitors, bounce rate, traffic source, etc.
Advertisement
Advertisement cookies are used to provide visitors with relevant ads and marketing campaigns. These cookies track visitors across websites and collect information to provide customized ads.
Others
Other uncategorized cookies are those that are being analyzed and have not been classified into a category as yet.
SAVE & ACCEPT